A new poll carried out by Civiqs has found that, for the first time in three years, more Americans oppose than support BLM. And, to be clear, that’s not the BLM that tried to steal Cliven Bundy’s cattle. It’s the Marxist organization that led months of riots in 2020.

Breaking: For the first time since May of 2018, more Americans now disapprove of Black Lives Matter than approve of it. (Per @Civiqs polling) pic.twitter.com/OXmLIY1ubf

Registered voters were asked, “Do you support or oppose the Black Lives Matter movement?” and 44% said they opposed it. 43% said they supported the group and 12% said that they “neither support nor oppose” the group. 1% of those surveyed said that they were “unsure.”

As Breitbart reports, support for the group was heavily dependent on party affiliation and somewhat dependent on age and gender:

Furthermore, a decline in the Hispanic view of BLM seems to be what’s driving down the group’s percentage of support, as ZeroHedge reports:

Driving the turndown in sentiment towards the group is the views of Independents and Hispanic/Latino voters. 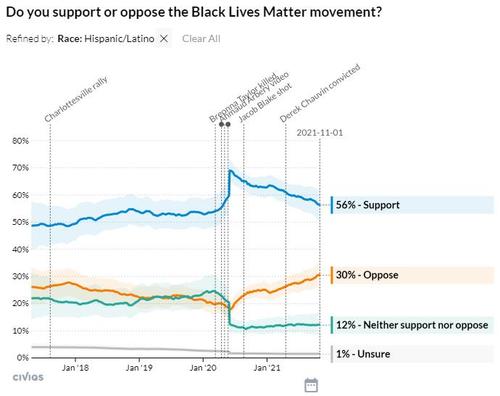 And it’s not just that people aren’t supporting BLM to the extent that they used to. It’s also that opposition to the group is solidifying as many Americans who previously claimed to be undecided are now open to declaring that they oppose the group.

While there are likely reasons for the shift in attitude, Civiqs does not provide one. Rather, it only provides the data.

Paul Jospeh Watson of Summit News, however, notes that one reason might be the immense damage of the 2020 BLM riots:

The summer 2020 riots, described by news outlets like CNN as “mostly peaceful,” were the most damaging in U.S. history, with total insurance industry payouts exceeding $2 billion.

An essay written by academics Jennifer Chudy and Hakeem Jefferson published by the New York Times earlier this year analyzed how support for BLM soared to +20% in mid-2020 but rapidly dropped to only +5% – which is where it was in mid-2019.

It’s likely that both that damage and a wearing off of the George Floyd effect are behind the group’s current lack of support. For, as Newshourfirst reports, BLM experienced a massive upswing in support after Floyd’s death, but that support evaporated as the group’s Marxist roots and violent propensities came to light over the summer of 2020, an effect which has likely built over time:

The response to the death of George Floyd caused a very dramatic shift, according to the polling data. By June 2020 only 28% of respondents were willing to state that they opposed BLM.

The immense social pressure and fear which drove public support for the movement at this time is also reflected in a sharp drop in the numbers of those who neither supported or opposed. This category of respondent appears to have evaporated almost overnight in early June.

Even Republicans generally became hesitant about expressing opposition to BLM at this point; immediately after the death of Floyd only 58% of Republicans polled were willing to say that they opposed the group.

[…]By September 2020 Americans were  once again willing to condemn BLM; a predictable result of the riots which consumed almost every major city through the intervening months.

[…]The Civqis data indicates that white Americans and Republicans, after initially fearing to oppose BLM, have felt increasingly secure in expressing their opposition.

So, while BLM might have initially received support from those scared to say otherwise, that effect has dissipated over time and more Americans are now expressing their real opinions on the issue.

Whatever the cause, what is clear is that BLM is finally back to being unpopular.