The legendary Gwen Stefani from the band No Doubt is back folks, but the woke mob is trying to go after her for some appropriation nonsense – but it’s a good thing they failed miserably because everyone loves Stefani and knows the ‘woke mob’ is a joke.

How in the world are these people not on some kind of suicide watch with all of the hate, negativity, anxiety, and various other issues they have? It must be absolutely awful to live in your own head so much that you have to actively go out of your way to find things to complain about.

These folks need to get a life.

Here’s the video and it’s a good one:

Gwen Stefani is in a new music video with Jamaican singer Sean Paul and it’s called “Light My Fire” and a handful of woke communists tried saying Gwen was appropriating black culture. Except, she’s literally in the video with a BLACK SINGER and it’s his video and his director likely told everyone what to do in the collaboration that came out pretty darn cool.

But of course, these facts have not phased the woke crowd who want nothing more than to ruin the fun anyone else is trying to have. I just can’t imagine even being mad about this. So much injustice in the world. Legitimate injustice, not the made up kind, such as the ridiculous anger over this video.

And yet this is what people are upset about. Unreal.

Stefani has her hair in dreadlocks and she’s covered in black, green, and yellow dress that reminds folks of the Jamaican flag – showing her respect and love for the culture, not appropriating it like the wokies say. But of course, one person had to just say something really stupid: “Y’all. Mother Appropriation is BACK!!!! Where my 2000s No Doubt/Gwen hive at!!!?? ITS TIME!!!” It was such a stupid comment that we won’t even link to the Twitter post, but we’ll show you the screenshot instead: 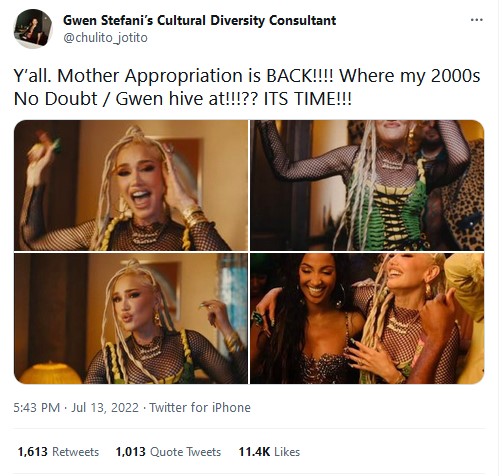 And as usual, the supportive people came out to show love to Gwen Stefani and Sean Paul as they collaborated on a fun song!

Lawrence Chavez: Gwen is an icon that loves and respects other cultures. This is definitely right down her alley and I’m tired of the media saying this is cultural appropriation it’s simply showing that she is very loving of other cultures and always has been. I love her. Her and Sean Paul together.. two icons in music. Iconic combination here for sure 🔥 the song and video are 🔥🔥👌👌👏🏻

Tina Cordova: It’s been a long time listening to Gwen Stefani.I followed her her career when she was with the group No Doubt.She’s amazing Artist very original and she has style lots of class.I saw the video Light my fire 🔥 her duet with my favorite Sean Paul was awesome 😎 Nothing wrong at all enjoy every bit of the video.🥰👍👏👏👏 The two should make more videos together

Gwen Stefani herself: we had so much fun shooting this video !! so happy it’s finally out 🥰 gx

Ruby C: Gwen, thank you for making this song, Absolutley love the crew you have with you in the video. It is spot in what I was waiting for and brought me back to the 90’s!

Barrington Facey: Sean Paul is true dancehall legend at the highest level and knows how to deliver every time..Gwen Stefani delivered some great vocal energy on this track solidifying the fact that she is a great Reggae/Dancehall fan…Shensea the latest dancehall phenomenon who is a very talented and versatile artist made her contribution seem so naturally effortless as she has such a natural flow when it comes to spitting lyrics on these types of riddim..This one is definitely a banger for the summer.

K: Love this! This is cultural appreciation NOT appropriation. Love it.

Shev: This song is so addicting!!!! It’s just so good! Sean Paul always find a a way to keep the Jamaican culture alive! Love that about him. Gwen adds a nice spunk/airy vibe and meshes well with the sound. And of course Shenseea brings the heat! This trio took me by surprise but I would love to see more collabs in the future.

Oren Ashees: 90’s, 2000’s & 2020’s icons together with the best references (shout out to The Doors), can’t even believe this featuring exists ! They made it with such an amazing energy. Shout out to Queen Gwen Stefani, King Sean Paul & Shenyeng Queen Shenseea