Former No Doubt frontwoman and sensational talent Gwen Stefani made a huge splash in her return to the music scene. Jamming with Sean Paul, she sings, dances, and looks phenomenal in the music video for the song titled “Light My Fire.”

But because nothing can just exist without leftists freaking out and finding something to complain about, they immediately tried to find something “racist” with her appearance.

Trending Politics summed up both the video and fabricated controversy in just a few words:

Gwen Stefani is in a new music video with Jamaican singer Sean Paul and it’s called “Light My Fire” and a handful of woke communists tried saying Gwen was appropriating black culture. Except, she’s literally in the video with a BLACK SINGER and it’s his video and his director likely told everyone what to do in the collaboration that came out pretty darn cool.

Stefani has her hair in dreadlocks and she’s covered in black, green, and yellow dress that reminds folks of the Jamaican flag – showing her respect and love for the culture, not appropriating it like the wokies say. But of course, one person had to just say something really stupid: “Y’all. Mother Appropriation is BACK!!!! Where my 2000s No Doubt/Gwen hive at!!!?? ITS TIME!!!”

An image of the insane tweet can be seen below: 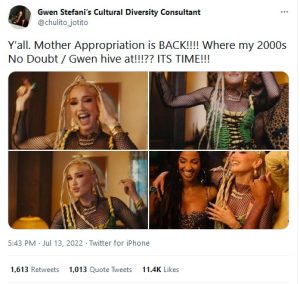 The fact that they want to pick a fight over the tri-color appearance of yellow, green, and black is proof positive that life is fantastic. I mean, they could complain about Joe Biden’s inflation, his disastrous and war-mongering foreign policy, his blatant lies about Covid jabs and the character assassinations of anyone who chose not to get it, but no. They want to go after Gwen Stefani for wearing a dress and sporting braided hair.

These people are as stupid as they are detestable.

Anyways, if cultural appropriation is a thing, does that mean blacks don’t get access to the internet anymore? They didn’t invent it. That means no electricity either. Or cell phones, light bulbs, cars, airplanes, and a constitutional republic. Do they really want to play this game?

Fortunately, despite normally being a cesspool, Twitter easily defended Stefani and took these contemptible anarchists to task:

Gwen is an icon that loves and respects other cultures. This is definitely right down her alley and I’m tired of the media saying this is cultural appropriation it’s simply showing that she is very loving of other cultures and always has been. I love her. Her and Sean Paul together.. two icons in music.

It’s been a long time listening to Gwen Stefani.I followed her her career when she was with the group No Doubt.She’s amazing Artist very original and she has style lots of class.

Sean Paul is true dancehall legend at the highest level and knows how to deliver every time..Gwen Stefani delivered some great vocal energy on this track solidifying the fact that she is a great Reggae/Dancehall fan…Shensea the latest dancehall phenomenon who is a very talented and versatile artist made her contribution seem so naturally effortless as she has such a natural flow when it comes to spitting lyrics on these types of riddim..This one is definitely a banger for the summer.

This song is so addicting!!!! It’s just so good! Sean Paul always find a a way to keep the Jamaican culture alive! Love that about him. Gwen adds a nice spunk/airy vibe and meshes well with the sound. And of course Shenseea brings the heat! This trio took me by surprise but I would love to see more collabs in the future.

Everyone loved the music and loved the video. Isn’t that the point? Steel drums have a time and place, but not the pop scene in 2022.