Tucker is known for using his show Chyron to slam people.

Well, he’s back at it, only this time he’s got his sights set on Joe Biden… and his formerly crackhead son, too.

Remember when the fact-checkers told us that Joe Biden was NOT sending “free” crack pipes to Americans, and called those of us claiming he was “liars” and said we were spreading “fake news”?

The White House also said it was not true and vowed they were NOT sending out “free” crack pipes.

Yeah, well, turns out they were the real liars and fake news peddlers.

The fine folks over at Washington Free Beacon actually ordered “Safe Smoking” kits, and there were CRACK PIPES in all of them.

The White House said safe smoking kits don’t have crack pipes in them.

So @FreeBeacon went out to see for our selves.

You can’t find baby formula for your child, but some crack head is getting a taxpayer-funded “free” crack pipe.

Even after the story about the crack pipes broke, Jen Psaki, being the shameless liar that she is, claimed it was a “conspiracy theory.”

We have the crackpipes, Jen https://t.co/QEcdwcMNgH

USA Today got it wrong. pic.twitter.com/9hUZkVzjkc

Literally anybody could have gone to the Biden admin's "harm reduction" spots and seen the free crack pipes for themselves.

Every fact checker apparently chose not to. pic.twitter.com/xPI6lQ5Hyt

It’s not a conspiracy theory. It’s real. And this is just another disgusting lie the fake Biden admin is spreading.

And these are the liars who want to create a “Ministry of Truth”… give us all a break.

So, amid all this “crack pipe talk,” Tucker called out Joe and his crack head son with a brutally savage message using the chyron on his show.

It was perfect. Here’s what it said: “Biden wants everyone to have access to crack pipes like his son Hunter.” 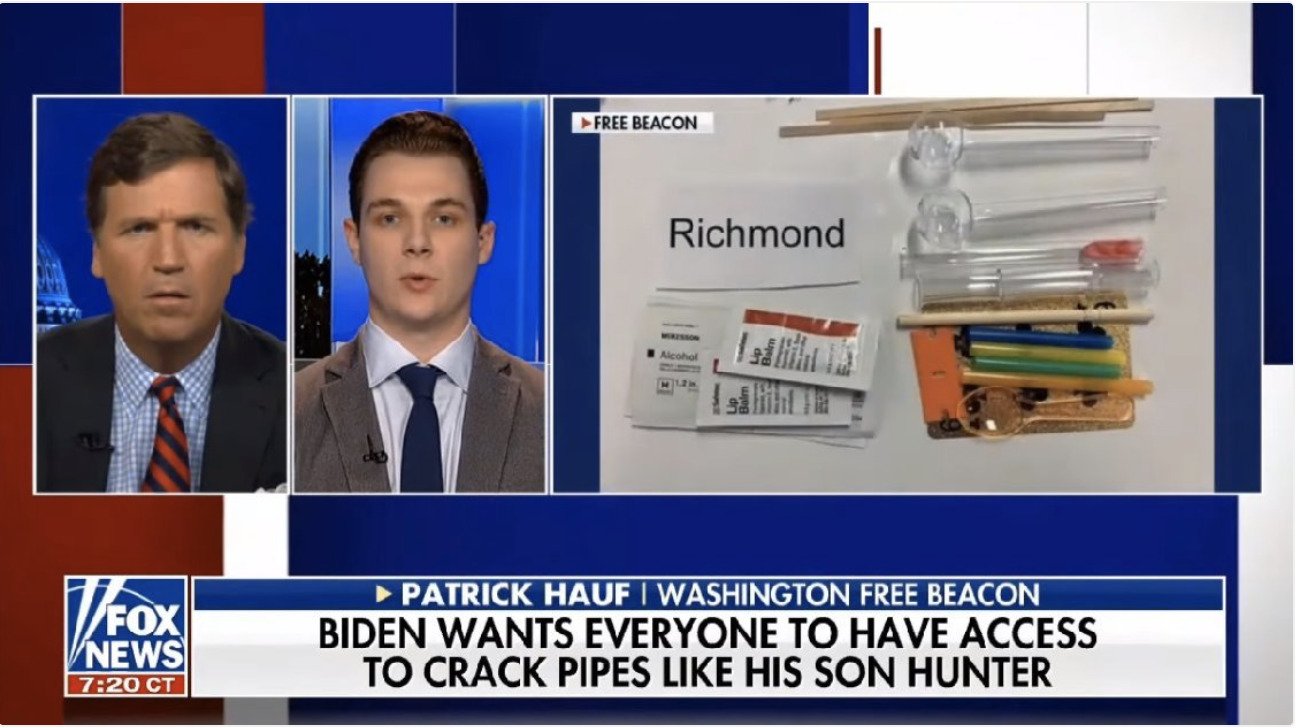 Here’s the segment, it was fantastic:

I am sure that Biden has a soft spot in his heart for crack heads, thanks to his deadbeat son.

But he’s not helping anybody by sending crack pipes.

All he’s doing is being a typical enabling Democrat.

If he truly wanted to help those people, he’d close the border and stop this tsunami of illegal drugs pouring over.

These people need rehab therapy and a trade school.

Instead, Biden wants them dependent on the government for their next “high.”