In what Trump is saying is evidence of “weaponization of the Justice System”, Joe Biden’s FBI has raided former President Donald Trump’s Mar-a-Lago home.

Trump announced the raid in one of his “Save America” statements, saying (in part, it was a very lengthy statement):

“After working and cooperating with the relevant Government agencies, this unannounced raid on my home was not necessary or appropriate.”

Trump added, in obvious indignation about the indignity he has suffered at the hands of the FBI, “They even broke into my safe!”

Here is Trump’s full statement on the matter: 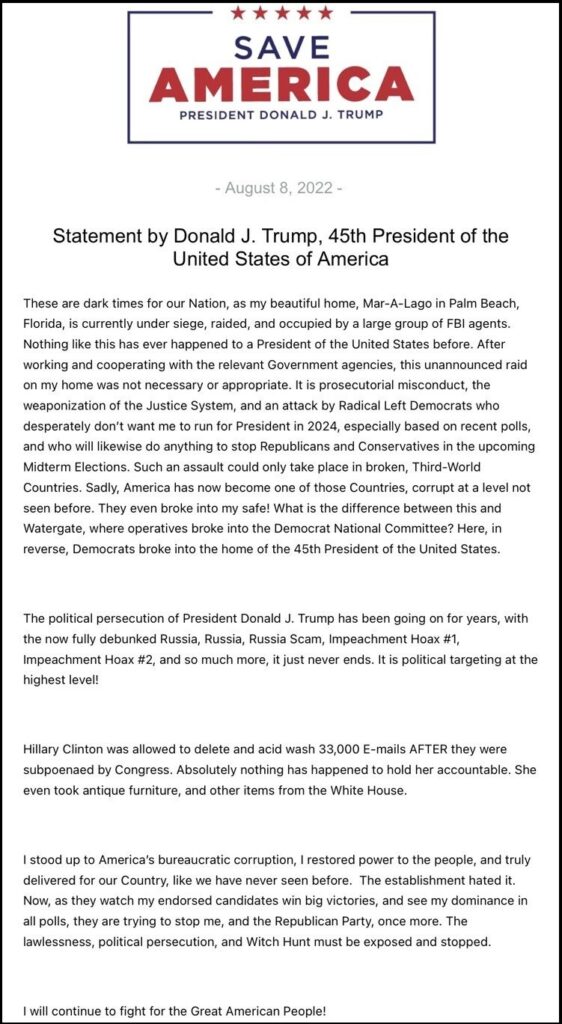 What happened is so far unclear, so here is what other sources, mainly MSM ones, are saying. Take them with a grain of salt, as they’re obviously anti-Trump, but they might hint at the motivations for the raid.

CBS, reporting on the raid and statement, said:

Trump in his statement called the raid an “attack by Radical Left Democrats who desperately don’t want me to run for President in 2024.”

Trump spoke over the weekend at the CPAC convention in Dallas, where he repeated the false claim that he won the 2020 election and said “now we may have to do it again,” alluding to a 2024 run. He has been active in holding rallies for his endorsed candidates in the 2022 midterm primaries.

At the end of the statement, Trump also called for donations to his “Save America” PAC.

The White House declined to comment on the raid.

NBC-2, however, hinted that the raid might have been rooted in January 6th (RINOs like Liz Cheney must be going wild with excitement), saying:

The request’s status is unclear.

Trump is currently not at Mar-a-Lago, his winter residence. He spends his summers at Trump National Golf Club Bedminster in New Jersey.

The Hill, however, hinted that a different issue might have been the ostensible justification for the raid, saying:

In recent weeks, the Justice Department has been focusing on Trump’s efforts to remain in power through a false elector scheme, transmitting what campaign officials referred to as “fake” election certificates in order to reverse the 2020 election in key states won by President Biden. The department has reportedly convened a federal grand jury to investigate the scheme, in addition to the grand jury investigation into the Jan. 6 attack.

It also previously executed search warrants on two lawyers who worked with the former president.

The Justice Department seized the phone of John Eastman, who crafted memos for the campaign detailing the false elector strategy as well as a plan for then-Vice President Mike Pence to buck his ceremonial duty to certify the election results. And it also searched the home of Jeffrey Clark, an assistant attorney general Trump weighed installing as attorney general so he could forward an investigation into his baseless claims of election fraud.

What happens next is unclear, particularly given that what sparked the raid is, as of the time this article was written, unclear, but what’s obvious is that the FBI is now taking an even more radical position and actively investigating former President Trump, something that could portend an attempt to keep him from running in 2024. That’s what Trump, as you can read above, suggested in his statement, saying:

“After working and cooperating with the relevant Government agencies, this unannounced raid on my home was not necessary or appropriate. It is prosecutorial misconduct, the weaponization of the Justice System, and an attack by Radical Left Democrats who desperately don’t want me to run for President in 2024, especially based on recent polls, and who will likewise do anything to stop Republicans and Conservatives in the upcoming Midterm Elections.”

Trump has so far confined himself to the Save America statement and Truth Social post of the statement in commenting on the matter.