President Biden’s policies have managed to take a fast recovering, energy-independent nation and flip it upside down in less than a year.

By closing pipeline construction, the U.S.is once again energy-dependent. As a result, gasoline and home energy cost are way up. In addition, COVID cases, and racial tension have also skyrocketed nationwide.

More bad news for Biden was just reported. U.S. inflation hit its fastest pace in nearly four decades last year as pandemic-related supply and demand imbalances, along with stimulus intended to shore up the economy.

The Labor Department said Wednesday the consumer-price index—which measures what consumers pay for goods and services—rose 7% in December from the same month a year earlier, up from 6.8% in November. That was the fastest since 1982 and marked the third straight month in which inflation exceeded 6%. 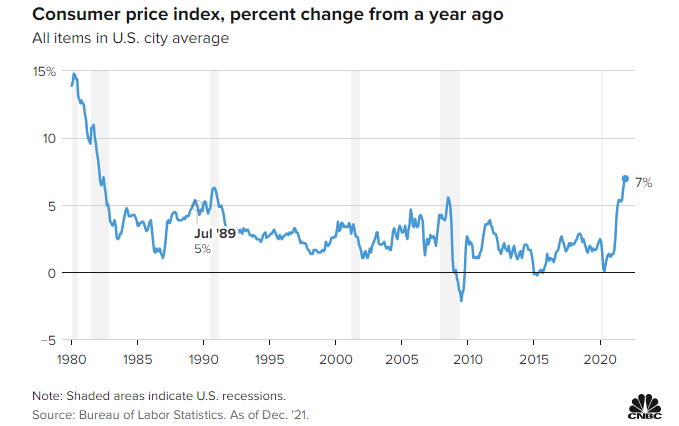 The CPI rose by 0.5% in December, which was a slower increase than the 0.8% in November.

“The Consumer Price Index for All Urban Consumers (CPI-U) increased 0.5 percent in December on a seasonally adjusted basis after rising 0.8 percent in November,” BLS noted. “Over the last 12 months, the all items index increased 7.0 percent before seasonal adjustment.”

Rising prices have been hitting Americans in the wallet.

“President Biden and Democrats in Congress won’t stop their reckless spending until inflation is so high that your paycheck and retirement savings are worthless,” Rep. Mary Miller (R-Ill.) tweeted.

Some GOP lawmakers have described inflation as a tax.

Inflation is a tax on every American. Period.

Rep. Jody Hice of Georgia tweeted that “Inflation is theft.”

House Dems are doing something about it.

In order to ram the legislation through the Senate, the entire Senate Democratic caucus would need to get on board, but Democratic Sen. Joe Manchin of West Virginia said last month that he would not support passage of the plan.

“Today’s report—which shows a meaningful reduction in headline inflation over last month, with gas prices and food prices falling—demonstrates that we are making progress in slowing the rate of price increases,” President Biden said in a statement about the consumer price index. “At the same time, this report underscores that we still have more work to do, with price increases still too high and squeezing family budgets.”

While the president claimed that food prices are falling, the consumer price index news release indicates that the food index actually rose 0.5% in December, which marked a slower pace than it had risen in recent months.

Most of the financial experts I am following are predicting a tough 2022 too as the Biden administration has not demonstrated the ability to turn things around.

For those who believe in the Great Reset, those in power are actually salivating at the declining economy hoping to deconstruct our capitalistic system by 2030.

Save Up To 66% On MyPillow Products – Use Promo Code ETTALK