One of the most radical leaders in the racist social justice movement is quick to ask people to trust her historical references, yet has yet to learn the well-publicized dates of the Civil War.

The creator of the revisionist ‘1619 Project,’ Nikole Hannah-Jones, espouses an alternative reality by arguing that the United States has been racist from its inception. Her material teaches the date of the founding of the nation was 1619, not 1776.

With the recent release of the much-anticipated book formed out of her popular essay series, The 1619 Project: A New Origin Story, far-left “academics and educators” have celebrated it as laying the groundwork for redefining and transforming the way the United States’ foundational story of its beginnings as a nation is told, even down to impacting how elementary school teachers present America’s founders to school children.

The book assures us that “the inheritance of 1619” – that is slavery, racism, and social injustice – “reaches into every part of contemporary American society, from politics, music, diet, traffic, and citizenship to capitalism, religion, and our democracy itself.”

Given her outsized influence as a New York Times writer, and now that she’s being held up in mainstream media and even establishment academia as an ‘expert’ on American history, it’s not too comforting to know that she doesn’t know the basic dates for the Civil War. 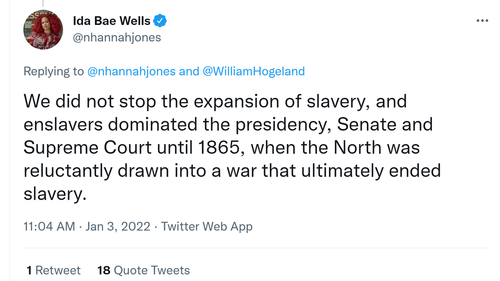 “…until 1865, when the North was reluctantly drawn into a war that ultimately ended slavery.” The woefully misinformed and ignorant of basic facts response which claimed the Civil War began in 1865 came during a Monday Twitter spat with William Hogeland, who himself is a widely published author of United States history.

A number of commenters were quick to point out in the wake of Hannah-Jones getting a basic fact which is taught to schoolchildren across the country wrong that the error is inexcusable. “Why would we expect you to know the correct year,” one quipped sarcastically.

Another pointed out the obvious: “I know history isn’t your strong suit, but the Civil War *ended* in 1865.” And another said, “When you have google at the palm of your hand, it makes no sense to state incorrectly when the Civil War began.”

When the head of the “1619 Project” can’t even get the year the Civil War began right… https://t.co/6EAryt5zDP

And it was Arc Digital Associate Editor Justin Lee who schooled Hannah-Jones on the basics: “The U.S. Civil War began on April 12, 1861 and for all intents and purposes ended on April 9, 1865. Students should memorize those dates rather than read a curriculum designed by someone who doesn’t know them.”

The U.S. Civil War began on April 12, 1861 and for all intents and purposes ended on April 9, 1865. Students should memorize those dates rather than read a curriculum designed by someone who doesn’t know them. pic.twitter.com/L11GxJEJgT

As with most issues, the left is promoting, the truth is not important as long as the ends are accompished.

This is similar to the overarching view of Hillary Clinton’s mentor, city organizer Saul Alinksy’s concept that lying and deception is moral as long at the ends of a successful movement justifies the means taken in the pursuit of the objective.

The 1619 Project is fallacious and racist, written by Nikole Hannah-Jones who is clueless.